Moulded Case Circuit Breaker MCCB is an electronic device that is used in the electrical field. In electronic component protection we used the MCCB vs MCB. So, we can say that its play the important … 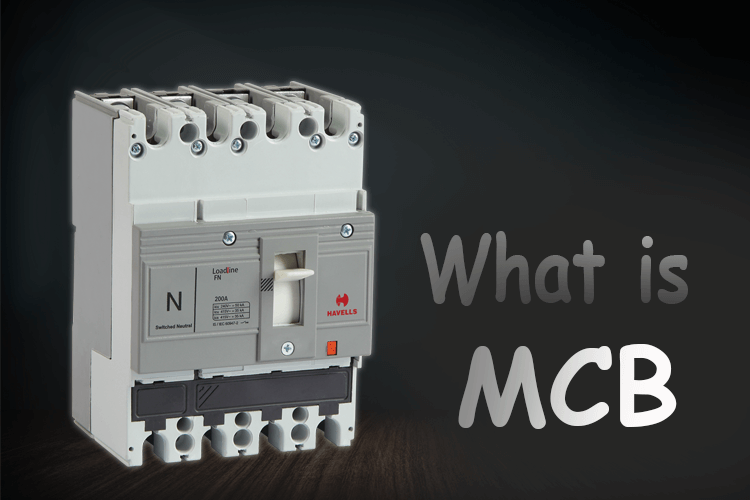 We used this component in day in day out during your work life. We will also be sharing with you what are the important points that you need to take note when selecting your equipment’s.

I have learned all about the MCCB by Wirekhoj and trust us it was very-very difficult. So, I share the most important points of mccb that you must know.

MCCB is basically a switch that turns on and off something like a light or load. The mccb also comes in different size and frames. So, Why don’t we just use a switch? This is because mccb is able to take higher current compared with the switch.

If you want to just use a switch the high current will break the switch easily. Also, mccb is fitted with current sensors that will trip the circuit automatically. We will explain more about the current senser later in this article.

MCCB is the Moulded Case Circuit Breaker. It is the modify version of the MCB. MCCB is used in the heavy current flow location. The current rating of a moulded case circuit breaker (mccb) is 100 Ampere to 1000 Ampere.

If the flowing current ratio is the lesser than 100 Ampere then never use the moulded case circuit breaker. You have using only the MCB.

It is usually advised to use mccb full form up to a maximum of 799 amps. For 800 amps applications and above, it is recommended to select acb. The IEC Standards we refer to will be iec 60947-2 for industrials usage IEC 60898 for domestic usage.

(In) is related current value determines when the MCCB trips due to overload protection, however this will usually not be the ampere that the MCCB full form will be tripped on contrary to many misunderstood.

Related is the current allowed to pass through the mccb indefinitely under the safest tested conditions stated in IEC 60947. We will explain the four main trip settings in the Lessig section later in this article.

You may also call (in)the ampere trip at of the mccb the (in) of a mccb can be found on the face of the mccb located at these locations.

Rated Frame Current : It is the maximum current value where the MCCB is designed, and it also used the physical dimensions of the device. The rated frame current defines as the higher limit of the adjustable trip current range.

When we see the size of the mccb then it comes with the different framed sizes. The sizes list of mccb is given below:

So, these all the different rated framed sizes of the mccb. These sizes of mccb can supply. You may also call it the ampere frame of the mccb. By now you should be confused. So, let me explain to you in simple terms.

Ampere Frame : Imagine both (in) Ampere trip and (inm) Ampere frame in terms of a bus. Ampere frame assumed the higher capacity of the number of people that you can allow on the bus and the bus will still operate normally.

Ampere Trip : Whereas ampere trip is the number of people really in the bus at that point of time usually ampere trip will be multiplying by a factor that it can be set on the mcb to lower the current protection.

When needed because you will never know the actual site conditions hope you understand  what is ampere trip and ampere frame now. Let’s move on the to the next topic.

Before we go into what is LSIG. Let we share with you why do we need to trip the mccb.

The circuit breaker will trip to increase in current to protections or save from the loads and cables connected to it.

By stopping the current moving or flowing from them. The operations may then resolve the problem and turning the circuit breaker backward. This appliance for all other tripping occurrence.

(Lg) Long term trip is usually is the amount of current that the circuit breaker determine  that the load is taking slightly slow down then usual. Typically, 1.05 to 1.2 times(Adjustable). As the name Long Times is suggest that the mccb will tripping after the present time delay tr.

Difference Between MCB and MCCB (MCB vs MCCB)

MCB : MCB is a miniature circuit breaker which is used to break small currents. Like in domestic LT Circuits. The ratings may be end up to 100 Ampere.

MCCB : MCCB is a moulded case circuit breaker which has a rugged construction as it can break larger current usually from 100 to 1000 Ampere.

So, this is the Difference Between MCB and MCCB (MCB vs MCCB). Hope you like our difference. Now we move to the next topic that is the mccb symbols.

As we know that every electronic device those are present in the electric field have the unique symbols. So, MCCB have an electric symbols.

So, there is an image of the MCCB Symbol. Moulded Case Circuit Breaker Symbol is given below that are as follows: 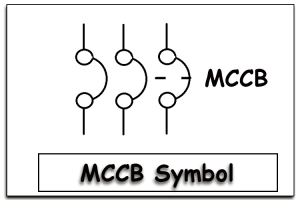 So, Guys this is the MCCB Symbol or Moulded Case Circuit Breaker Symbol. Now we are moving to the next topic.

Guys, there we provide you to the best mccb price. The prices may be changing time to time. These prices are taken down from the various kinds of the e-commerce website. The mccb price are as follows in the given below table.

So, guys this is the price of the mccb in the market. This price may be increase or decrease time to time. Now you can take the idea of the mccb price.

So, guys the final conclusion is that the mccb is the advance features of the mcb. MCCB used those places where the heavy current flow. So, upper article has the all small and vast information related with the mccb.

Also, we learn about the difference between MCB and MCCB (mcb vs mccb) and mcb price. So, these all things we cover in this single checklist of the moulded case circuit breaker.

If you like or enjoy our article then please share this article with your friends and relatives. If you have any query related with the mccb then please connect us via comment section.

MCCB is the Moulded Case Circuit Breaker. It is the modified version of the MCB. MCCB is used in the heavy current flow location. The current rating of a molded case circuit breaker (mccb) is 100 Ampere to 1000 Ampere.

Q.2. What is the AF and AT terms that are used in the MCCB?

The full form of MCCB is Moulded Case Circuit Breaker.

Q.4. What is the difference between MCB and MCCB?

MCB : MCB is a miniature circuit breaker that is used to break small currents. Like in domestic LT Circuits. The ratings may end up to 100 Ampere.

MCCB: MCCB is a molded case circuit breaker that has a rugged construction as it can break larger currents usually from 100 to 1000 Ampere.

Wirekhoj is an innovative way to learn about Electrical Products, Electrical Wiring and Electrical Component etc. The aim of the WireKhoj to serve the smallest and biggest things to the whole world. Read More

Subscribe us on Email and Social Media for more stuff notification